The Jewish Part in the Caucasus Conflict 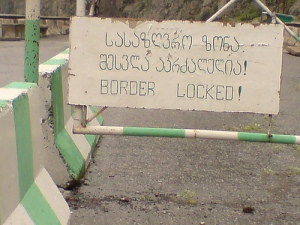 Last week, as the state of war was officially declared between Russia and Georgia over the region of South Ossetia, Israel suddenly popped into the picture as a controversial participator. Russian Prime Minister Vladimir Putin accused the Jewish state of its support for Georgia based on the United States’s driven Cold War philosophy: seeing Russia as the enemy and Georgia as a victim. Israel, however, responded with a claim that above all other implications, it respects Georgia’s territorial rights.

To those who were barely aware of the small Caucasus nation of only 4.7 million until an eruption of the latest events, Israel’s response might seem surprising, but Israeli endorsement of Georgia is an old story. It developed atop strong personal ties dating as far back as early 2000. Since Georgia Defense Minister Davit Kezerashvili received his education in Israel, Georgia’s entire military infrastructure has been built on an Israeli model. Hundreds of retired Israeli top army personnel have been designated to assist with training of the Georgian forces, and more than $500 million worth of Israeli-made military equipment was sold to Georgia over the past few years. (Even though this supply comes after that of the U.S. and France.)

Ha’aretz quoted an Israeli soldier who had recently returned from Georgia, where he partook in the training:

“There was an atmosphere of war about to break out….From my point of view, the battles of the past few days were to be expected.”

His observations proved gruesomely true. As soon as Tbilisi forces entered South Ossetia in their attempt to regain power over the pro-Russian region, Russia reacted with a massive counter-offensive. In the midst of fighting, central Georgia was leveled to the ground. Captured in photographs were dozens of bomb-stricken buildings, streets swarmed with tanks and hundreds of aggrieved people fleeing the ruins now vaguely resembling their homes. Haunting were the images like that of an older woman, weakly collapsed on the ground, looking on as her apartment burns before her eyes. During the five-day conflict over 2,000 people were killed, and over 20,000 fled the region.

Out of the ones that fled there were about 200 Georgian Jews, who were evacuated to Tbilisi by the Jewish Agency. Their move to the Georgian capital was for temporary safety, if things were to get worse an Aliyah was to be arranged.

The Georgian Jewish community totals about 12,000 and remains tightly interdependent. Historically, due to the anti-Semitism from the Soviet regime, the Jewish community has remained cautious. Gurjim were incapable of intimately identifying with the general Georgian population and opposed to merging with the Soviet Ashkenazi. So when the Jewish humanitarian hand offered them temporary asylum, some 200 accepted, but about 50 declined, staying on guard in the city of Gori. One Georgian Jew was quoted as saying, “I’m staying here till the last Jew is evacuated.”

The Jewish Agency took their duty seriously enough to assist even Jewish tourists and businessmen in leaving the country, which was met with certain hostility in the Israeli blogosphere:

In today’s day and age where we live in a world that is increasingly capitalistic and democratic, one would think that 230 people who chose to go to a country for their personal profit (to run businesses and companies or touring or for whatever reason they are there), Israel, or any parent country, would have no obligation to retrieve them.

They went to make a buck, they can find their own flight back. Why should we, the taxpayer or the government, pay for them to come back now that they are in trouble? Why should we risk ourselves for them? It is a free market – you want to get to Israel, you had enough in Georgia, find a way to get there on your own.

After this recuperation, Israel also halted its arms sales to Georgia.

“The Russians don’t look kindly on the military cooperation of Israeli firms with the Georgian army,” said the former Israeli ambassador to Georgia and Armenia, Baruch Ben Neria. Torn between its friendly relations with Georgia and its fear that Russian support of Iran and Syria will grow with continued arms sales, Israel found itself in an awkward position. The Jewish land is also home to some 80,000 Georgian Jews who would like to see more transparent backing for the small Christian nation of their origin.

After a brutal 5-day war, a ‘truce’ was reached between the opposing sides, in which they both agreed to a cease-fire and pull back to pre-fighting positions. Yet both sides are reluctant to fully give in. Georgian President Saakashvili said that although he accepted the “general principles” behind the truce he had no use in signing an official agreement, hand-delivered by the French President Nikolas Sarkozy, since it was no more than a “political document.” Russian President Medvedev did sign on his part, but while publicly ordering his defense minister to respond militarily to “any emerging hotbeds of resistance or any aggressive actions.”

It is not quite clear whether he was provoked to do so, but as of yesterday, Medvedev was breaking the agreement. The Associated Press reported that some 50 Russian tanks are moving through the devastated streets of Gori, pawing their way toward the capital of Tbilisi. Still Georgia, as it turns out, was never particularly innocent in its intentions towards Russia. Israeli government became aware of the growing risk of war a few months back, when Saakashvili placed an order for 200 advanced Israeli-made Merkava tanks. The order was denied, but the approval of Georgia’s strategic movements remained resolute.

A shipment of Israeli humanitarian aid was delivered to Georgia yesterday morning as a confirmation of loyalty between the states.

ALSO IN THE NEWS:

2 responses to “The Jewish Part in the Caucasus Conflict”