Besides being unique in that she’s Jewish, the newest American Girl Doll shares a name with a criminal wanted by the FBI. 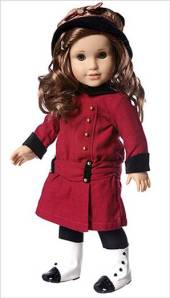 Rebecca Rubin is 18 inches tall, with light brown hair and hazel-green eyes. She is the daughter of Russian-Jewish immigrants living in New York City in 1914. Her red wool dress, black hat, and two-tone boots show that she is a snazzy dresser. She even comes with her own challah. 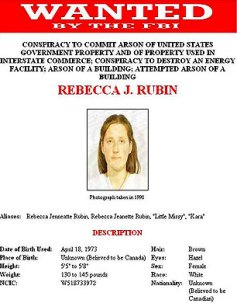 Rebecca J. Rubin (the J is for Jeanneatte) is 46 years old and between 5’5” and 5’8” tall. She has brown hair, hazel eyes and is quite possibly Canadian. She might have some light facial hair. She is also occasionally known as ‘Little Missy’ or ‘Kara’. She is wanted by the FBI for arson and attempted arson.

The easiest way to tell them apart? One is a doll and one isn’t.

Read more about Rebecca J. Rubin and Rebecca Rubin after the jump.

Rebecca J. Rubin is a member of the Earth Liberation Front (ELF), an eco-terrorist group that destroys property in order to protect the environment. The group focuses on economically damaging companies who exploit (ELF’s words) the environment for their own gains. The group is organized into independent cells all over the country, which facilitates their guerrilla-like attacks. Members remain anonymous and there is no designated leader, which means that if one cell is stopped, the others can keep operating.

Rebecca J. Rubin participated in several arson attempts, including the firebombing of the Vail ski resort restaurant in 1998. According to ELF’s website, the resort was bombed “on behalf of the lynx.” Vail is home to one of the last Canadian lynx populations in the United States. To the ELF, that is something worth bombing for.

The American Girl company uses its dolls and their stories to illustrate how girls can overcome anything and flourish even in the most difficult circumstances. Their dolls span time periods from before America was a country to the 1970s, when disco ruled. Rebecca Rubin, living in 1914 New York, has her own share of  difficulties. But she doesn’t bomb buildings when things don’t go her way. Instead, in the American Girl tradition, she faces them with spunk and pluck and perfectly curled hair.

This entry was posted in Culture and tagged American Girl, FBI. Bookmark the permalink.