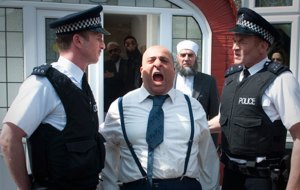 When a Muslim and a Jew walk into a bar, it’s a joke.  When a Muslim discovers he was born Jewish, it’s a movie.  The Infidel, shown as part of the 2010 Tribeca Film Festival, is the story of Mahmud Nasir (Omid Djalili), a middle-aged Muslim man from London’s East End, who discovers after his mother’s death that he was adopted as a baby.  Not only was he adopted, but his birth parents were Jews.  Jews who named him Solomon (Solly) Shimshillewitz, or as his new friend Leonard Goldberg (Richard Schiff) suggests: Jewy-Jew-JewJewawtiz.

While Nasir is trying to cope with his new identity, he also must deal with the impending marriage of his son to the stepdaughter of one of Egypt’s most radical imams, Arshad El Masri (Yigal Naor).  The movie takes off when Nasir discovers that his alleged birth father is dying in a nursing home, but can’t see him until Nasir learns what it means to be Jewish.  (For the Rabbi is guarding the door, this means Nasir must know how to say the names of the five books of the Torah in Yiddish or recite the Shema).   Desperate, he turns to his caustic neighbor Goldberg who instead, teaches him the truly important aspects of Judaism: how to say “oy” with the right inflection and knowing how to dance the Kazatsky (certainly a critical skill in my family!).

If you’re looking for a light-hearted send-up of Jewish and Muslim stereotypes, this may be the movie for you.  The writer (David Baddiel) was not afraid to openly mock both sides with often pointed humor.   And watching on-screen chemistry between Djalili and Schiff is definitely worth the price of admission.  Beneath the laughs however, the film did try to address some larger issues–religious conflict, death of a parent, loss of identity–which is where it fell flat.

To take on these topics with a comedic touch, as Baddiel did, is admirable but he didn’t trust his writing skills to take his set-up to the next level.  For example, towards the end of the movie we see Nasir sitting down with the Torah and the Koran on the table in front of him.  Both books are leather-bound with ornate decorations on the covers.  He opens each book to the first page and begins to read.  Suddenly, he realizes how fundamentally similar these two books are, despite his pre-conceptions and he begins to reconcile his seemingly disparate identities.  But instead of letting the message sink in both for the character and for the audience, the camera quickly shows him grabbing a cup that reads, “#1 Mutt.”  Sure it’s funny.  But it was defensive humor, almost as if Baddiel was afraid that one serious moment would detract from the overall humorous tone of the movie.

Similarly, in making this a film about a man torn between religious identity: Judaism vs. Islam, moderate vs. radical Islam, Baddiel primed us for a deeper conflict that never happened.  Comedy gives us permission to explore even the most contentious of situations and has the confidence that audiences will follow.  I wanted him to take advantage of this loop-hole and go deeper–to take on the simmering tensions that right now are only accessible through humor.  Instead, he came up short–offering only watered-down hostility instead of full-blown craziness.

During the Q and A, Baddiel and Josh Appignanesi (the director) mentioned they had been a little nervous about the film’s reception by Britain’s Jewish and Muslim communities. They were pleased to report however, that after its release no one was burning them in effigy or calling them anti-Semites.  Which, considering the topic, is no easy feat.  Despite its flaws, the success of the movie proves that Jews and Muslims can agree on at least one thing.  Can a comedy about AIPAC and JStreet be far behind?

Symi Rom-Rymer writes and blogs about Jewish and Muslim communities in the US and Europe. She has been published in JTA, The Christian Science Monitor and Jewcy.

This entry was posted in Politics and tagged Jews, London, Muslims, Richard Schiff, The Infidel. Bookmark the permalink.

One response to “Fabulous, Feel-good, and Fatwa-Free”