Israeli supermodel Bar Refaeli, newly crowned the hottest woman in the world by Maxim magazine, will likely be relieved to know that, at 5’8″ and 127 pounds, she meets the requirements of the new Israeli law mandating that models maintain a healthy body mass index (BMI).

The law, passed in March, requires models to provide a recent medical report at every photo shoot that shows that the model is healthy and has a BMI above 18.5. In order to maintain that BMI, a 5’8” model would need to weigh above 119 pounds.While individual fashion shows have started to issue similar rules, this seems to be the first government-mandated regulation in the world. Lawmakers in Israel hope that the law will show young girls that being unhealthily thin is not desirable.

According to a 2000 World Health Organization survey, more than 70 percent of girls (grade 6-10) in Israel want to change their bodies, and about half of them said they felt “too fat.” Two percent of Israeli girls between the ages of 14 and 18 have severe eating disorders.

A 2011 New York Times article suggests that eating disorders may disproportionately affect Israeli girls as well as American Orthodox girls. Rabbi Saul Zucker, educational director for the Union of Orthodox Jewish Congregations of America, explains, “If we don’t confront it, it’s going to get worse.”

In addition to BMI regulations, the law requires Israeli advertisers to fess up if they are digitally altering pictures; the manipulated images must include a clearly written notice.

Israel is to be commended for being the first country to take this huge step. Not only will this law be saving the lives of models, but it will also be promoting a healthier body image for young girls. While the effect the law will actually have remains to be seen, it is a great first step. Obviously the lawmakers haven’t waved a magic wand that will erase eating disorders and body-image issues from the country, but they’re showing that these issues are on the government’s radar. That’s huge.

The Other Jewish Comics

With the new influx of superheroes and comic book characters into film, what was formerly a somewhat niche genre has become mainstream. On opening weekend, The Avengers made $207,438,708 in the US alone. (That’s a lot—the massively popular The Hunger Games came in at $152,535,747 its opening weekend.) There may not, at first glance, seem to be anything Jewish about the characters that populate superhero movies. But, not only do “comic book superheroes…disguise themselves to save the world,” according to former Marvel group editor Danny Fingeroth, “they also disguise their Jewish heritage and values.” The superhero trope owes much to Judaism and the Jewish authors who have created many of the comic book world’s enduring figures: Captain America, for example, is intended to be a super-soldier to fight the Nazis, and X-Men’s Magneto discovers his powers as his parents are torn from him in a concentration camp.

This month, Washington, DC’s Theater J will produce The History of Invulnerability, a play that explores the development of the Superman story by looking at the struggles Jewish author Jerry Siegel faced while producing the work. Playwright David Bar Kats “doesn’t pull any punches with the brutality of the era,” using the play to reflect the emotional struggle faced by Siegel during his life and creative process, and by humanity during the period prior to America’s entrance into World War II. In the words of one reviewer, “the fantastic stories of Superman swirl with moments of Siegel’s own life and tales of Jews at Auschwitz during World War II” to illustrate that American Jews created superheroes like Superman to conquer their own sense of vulnerability.

Siegel was not alone in this effort—there are books and books written on the role of Judaism in the comic book industry, not only in the cases of Superman, Captain America, and X-Men, but also Batman, Spider-Man, the Justice League, the Hulk and the Fantastic Four. So why have Jews turned to these characters? Superman helped Jews feel more empowered in the face of absolute vulnerability, and others reflect the importance of Jewish ideals like social justice. Captain America, created by two Jewish authors, was a scrawny outcast, the outsider looked down upon until he is scientifically enhanced to be a Super-soldier, building American morale and combating Nazi Germany. On the cover of one of the original Captain America comics, he is even depicted literally punching Hitler in the face. Following World War II, his popularity dwindled until he re-emerged in the 1960s—his story picked back up with the discovery of his body, frozen since World War II. Having been estranged from life as he knew it, he becomes a character lost in a new era and “haunted by past memories, and struggling to fit into 1960s society, which was much like the sentiments of many Holocaust survivors.” He was both a source of hope for those who felt like outsiders, as well as someone to whom Jews could relate in the years after the Holocaust.

Similarly, the Fantastic Four, written by Jewish author Stan Lee and published by Martin Goodman, exhibited sentiments familiar to Jewish Americans. A crime-fighting team of superheroes, the Fantastic Four included a character named Benjamin Grimm whose exposure to radiation transformed him into “a grotesque, scaly-hided strongman dubbed the Thing.” His struggles with his appearance, and the resulting ostracism and insecurity, led him to separate from the Four and go in search of reconciliation and his own sense of identity. His struggles represented the challenges of living as a minority in the 1960s, and the need for “others” to develop “thick skin” in order to make it in an often intolerant world.

Like all popular culture, the comic book serves both as a mirror to reflect and a tool to shape society and self, an avenue explored by Jewish authors to express their frustrations with intolerance and anti-Semitism, to show the world both the experience of the “other,” and to establish a rallying point and a sense of self. 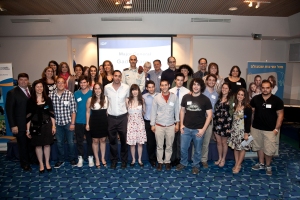 The Israeli Embassy was full of blue and white balloons, and a falafel bar was stationed at the back of the room. What better way to send off Americans to Israel?

Last Thursday, Nefesh B’Nefesh and the Jewish Agency held a farewell celebration in honor of the 250 people making aliyah from the Mid-Atlantic region. Once past security, a lively gathering was waiting inside the embassy.

The program started a little later than scheduled, preparing the guests for the Israeli way of life. As guests took their seats, Israeli ambassador Michael Oren and his wife Sally took the stage to say a few words. Both the ambassador and his wife made aliyah around thirty years ago, meeting six months after she arrived. “The day he got out of the army, I made aliyah,” she explained. “We met six months later, and one year later we married.” It was always Oren’s dream to be the Israeli ambassador and having been “devoted Zionist youngsters,” the transition was relatively easy for him. Sally ended her speech by wishing the evening’s guests a “nesiyah tovah and hatzlacha rabbah,” a good trip and lots of luck.

The program proceeded with a video from Jewish Agency chairman Natan Sharansky and a few more speakers. Meanwhile many of the guests continued to prepare for the Israeli way of life by chatting in the back of the room.

After the speakers were finished, those making aliyah were called up to be photographed. The first group called up was Gar’in Tzabar, young Americans who were planning on enlisting in the Israeli Defense Forces. Of the 250 people making aliyah from the region, 140, or 55 percent, are between the ages of 18 and 35. Some are joining the IDF, while others will be attending ulpan to hone their Hebrew skills.

One such individual, Arella Mayer, explains that she didn’t see an alternative to making aliyah: “It was a question of when, not if.” Mayer is in fact making chazarah, or returning to Israel. Born in America, Mayer and her family made aliyah when she was five months old. At the age of10, her family returned to America, but Mayer knew she would return. After graduating from the University of Maryland, Mayer was ready to return to Israel and join the IDF. While she doesn’t know exactly what she’ll be doing in the army, she wants to “defend American values of democracy” in Israel in whatever way possible. After studying Holocaust Studies at Maryland, Mayer felt that if she could be in the position of doing something for Israel, she should do it. “It’s a privilege to be in the IDF,” Mayer says with pride.