Without Sight, Hearing an Operatic Calling 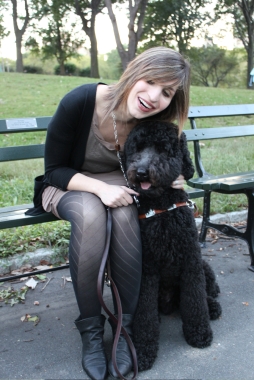 If there were one word mezzo-soprano opera singer Laurie Rubin would use to describe her career, it would be “rollercoaster.”

But Rubin, 33, who was born blind, has not let obstacles block her path to success. The Oberlin- and Yale-educated solo singer, who has appeared in solo recitals and performed alongside opera star Frederica von Stade, continues to travel to performances across the United States.

In addition to a booming singing career, Rubin is also balancing a jewelry line and the release of her new memoir, Do You Dream In Color? Insights From a Girl Without Sight, which will hit bookshelves October 23.

“Music has helped me see in a different sort of way,” Rubin said. A lack of sight enriches Rubin’s sense of the music; she describes instruments as having colors, and different character.

“There is something about the music and the movement,” Rubin said, adding that the different keys and physical motion of the instruments give her a sense of landscape. “When someone says ‘Oh, that is the most beautiful sunset,’ I picture in my head what that sounds like musically.”

Drawn to music at an early age, Rubin always had the idea that classical was her calling.

“I told my teacher that I didn’t want to sing pop music, but I wanted to sing like Christine in Phantom,” Rubin said.

But with musical success came the struggle of finding venues to perform. Wary producers often shied away from the idea of having a blind performer onstage .

“Their vision of blindness is somebody who is fumbling in the dark without their glasses on,” Rubin said.

Rubin’s drive to redefine the perception of blindness is not new. As the first blind bat mitzvah at Valley Beth Shalom in California, Rubin started to accept the role of being a pioneer for people like herself. Rubin’s Jewish identity has played a large role in her musical career. When her friend, Israeli composer Noam Sivan, was tasked with writing a piece for her in 2008, Rubin recalls begging Sivan to write a Hebrew piece of music.

“I really enjoyed singing those Yiddish pieces, those heart-wrenching ones, because I realized that hitting it would also reach out to Jews around the world,” Rubin said of the melodies she sung as a young singer. “It didn’t matter what language, it would be an emotional sort of bonder to a bunch of Jews all over the world.”

According to Rubin, her Jewish identity and connection to Judaism are central to the first few chapters of her book. The book also explores the answers to questions Rubin believes others would ask but are afraid to. The book’s title–“Do You Dream in Color?”–is the question Rubin says she is asked most.

With her book in stores soon and several performances on the horizon, including two concerts in Washington, DC on October 22 at the Kennedy Center and October 23 at the National Endowment for the Arts, Rubin hopes to continue sharing her story with a wider audience.

“There is something about sharing your ideas through music that seems to reach people’s hearts,” Rubin said.

This entry was posted in Culture. Bookmark the permalink.

11 responses to “Without Sight, Hearing an Operatic Calling”