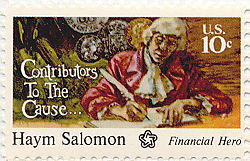 “You’re Jewish, so do you celebrate Independence Day?” When you live in a small town with a small Jewish population, such a question is commonplace. Though the reply may be polite (with an inconspicuous jaw-drop, of course), I really want to scream, “Jews enjoy fireworks, barbecues and a day-off from work like everyone else! We’re Americans too, after all!”  Why do people think American Jews don’t celebrate holidays that commemorate American history with dear old Uncle Sam?

Perhaps the reason is that when people look back on this country’s founding, they think of names like John, Thomas and James; not Moishe, Dovid, and Shlomo. Jews are thought of as immigrants who came to the United States about 100 years ago with strong ties to Eastern Europe and, eventually, Israel, so what part could they possibly have played back in 1776?  As it turns out, Jews were in the thick of the American Revolution.

Of the 2.5 million colonists in 1776, the Jewish population in America numbered no more than 2,000. These Jews were mostly Sephardic, of Spanish and Portuguese origin, emigrating from South America, the Caribbean and Western Europe to the American colonies. Despite such small numbers, Jews played an active role in the American cause on a variety of fronts. Financially, Jews like Jonas Philips, who had business connections to their coreligionists in the West Indies, became blockade-runners, jeopardizing their ships to bring goods through the British blockade on American ports.

Among investors, Polish-born Jewish immigrant Haym Solomon, played a significant role in financing the revolution. After being arrested as a spy by the British in 1776, Solomon was pardoned and served as an interpreter for the Hessians (German troops hired to fight for the British). In this role, Solomon helped prisoners escape and encouraged the Hessian mercenaries to desert, resulting in another arrest and a death sentence. Fortunately, Solomon managed to escape to the patriot capital, Philadelphia, where he used his financial acumen to support the rebels, lending thousands of dollars to the Continental Congress and advancing the American government $200,000 during the war effort. Solomon also supported his fellow Jews, becoming an influential member of Philadelphia’s Mikveh Israel Congregation and advocating to repeal the restrictive laws that barred non-Christians from serving in public office. In 1975, the United States Postal Service issued a stamp honoring Solomon as a “Financial Hero…responsible for raising most of the money needed to finance the American Revolution and later to save the new nation from collapse.”

Jews also served bravely on the battlefield side-by-side with their non-Jewish compatriots. Examples include Lieutenant Colonel David S. Franks, an adjutant to Benedict Arnold; Dr. Philip Moses Russell, George Washington’s surgeon; and Colonel Solomon Bush, adjutant general of the Pennsylvania militia. In Charleston, South Carolina, location of the largest American Jewish population until 1830, most Jews served on the American side of the conflict, with one regiment comprising so many Jews that it became known as the “Jew Company.” One important Jewish South Carolinian, Francis Salvador, championed the American cause as a member of the South Carolina General Assembly, the first Jew to hold the office in any of the American colonies. Salvador served as a delegate to the revolutionary Provincial Congress, which set forth the colonists’ complaints against Britain, as well as on a commission that attempted to convince the Loyalists throughout the colony to join the American cause. Unfortunately, Salvador could not see his efforts come to fruition, as he died in combat in 1776, becoming the first Jewish casualty of the war. In 1950, to celebrate the bicentennial of Charleston’s Jewish community, the City of Charleston erected a plaque in commemoration of Salvador that reads:

Born an aristocrat, he became a democrat, an Englishman, he cast his lot with America.
True to his ancient faith, he gave his life for new hopes of human liberty and understanding.

Jewish participation in the American cause did not go unnoticed in revolutionary times either. In response to a letter from Moses Seixas, warden of the Hebrew Congregation in Newport, Rhode Island, George Washington wrote:

May the children of the Stock of Abraham, who dwell in this land, continue to merit and enjoy the good will of the other Inhabitants; while every one shall sit in safety under his own vine and figtree, and there shall be none to make him afraid.

This letter not only set the standard for religious freedom in the fledgling nation, but also solidified Jews as citizens in the newly created United States of America.

So, on Independence Day, I will raise my Hebrew National hotdog in the air to commemorate the Jewish patriots who served this country in the American Revolution, who fought for our freedoms and our livelihoods, which include allowing us to live as both proud Jews and Americans.  No questions asked.