The Seder: Not Just for Jews Anymore 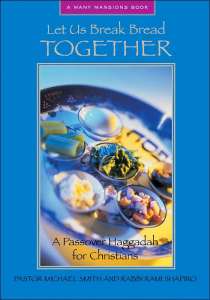 Did you know that the three pieces of matzo used during Seder represent the holy trinity?  Or that a leg of lamb on the Seder place could replace the shank bone?  Sound absurd?  Perhaps, but not if you’re celebrating Passover as a Christian.

Yes, that’s right.  Passover is no longer just the domain of Jews, but also of Christians who are–  according to Rabbi Rami Shapiro, a comparative religions professor at Middle State Tennessee University and co-author of “Let Us Break Bread Together: A Passover Haggadah for Christians”–seeking a closer connection to Jesus as a man and as a Jew.    “The practice of Seders is a growing phenomenon.  Christians are really interested in the Seder meal and [churches] are trying to give their members a sense of what it was like during the life of Jesus.” END_OF_DOCUMENT_TOKEN_TO_BE_REPLACED

The man to unite the Jews, Christians, and Muslims- At least in cartoon form

While most people are waiting to see what will happen on their favorite television shows at the end of this season, the producers of “The Simpsons” already have a show planned for next season. It will take Homer Simpson to the Holy Land, where the Simpsons have never been before, according to Al Jean, the show’s executive producer.

“I think we’re going to do one next year where they go to the Holy Land as we haven’t been there yet. The premise will be that the Christians, the Jews and Muslims are united in that they all get mad at Homer. It’s the only thing they can agree on,” [Jean] said.

The details for the show aren’t fully worked out, but we’re already a little excited.