Well, it’s been a few weeks now since Barack Obama was elected, and preliminary indications do not point to a massive restructuring of the fundamental American traditions (besides the ones that said only white people should be president). No, Obama has not nominated Leon Trotsky or Eugene Debs as honorary economic advisers, and former critics are starting to fall in line behind the president-elect.

The Orthodox Union‘s Institute of Public Affairs is one such example. Known for their conservative view on things, the IPA gracefully embraced Obama post-election, and, in a recent post entitled “It Was Only A Matter of Time; We All Love Obama (for) Now”, say that other former critics in the Jewish community have too.

Specifically, they link to an editorial written recently by the editors of The Jewish Press that acknowledges their criticisms of Obama while also overcoming them for a larger purpose:

This page made no bones about our support of Sen. McCain and our discomfort with many of Mr. Obama’s positions and much of his political history. His relationships with some individuals who despise America and Israel and who blame the threats and actions of rogue countries and terrorists on American foreign policy bothered us no end, as did his unconvincing attempts to explain those relationships. We were also made uneasy by his promise to level the international playing field and his blessing the notion of “spreading the wealth” here at home… END_OF_DOCUMENT_TOKEN_TO_BE_REPLACED

Fun With The Internetz

Not bad for my first go, eh? Check out churchsigngenerator.com for nonstop fun.

Click “more” to see another try from the other perspective. END_OF_DOCUMENT_TOKEN_TO_BE_REPLACED 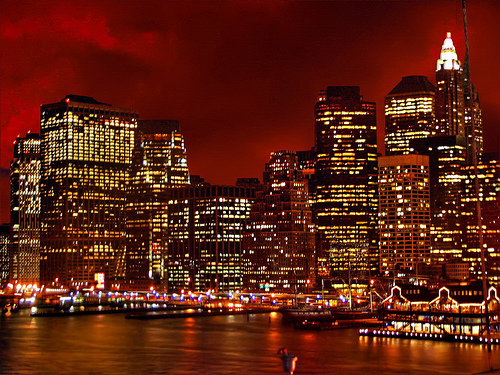 A group of journalism graduate students at Columbia University put together this interesting study of how Brooklyn is politically divided (“Bleeding Red for McCain”) on their original online news publication, Brooklyn Ink. Using public records of campaign donations, they put together a map that visually reflects which areas of Brooklyn are red and which are blue. Following the map is a series of vignettes about the particular areas in support of McCain. The introduction follows:

Venture to the southeastern point of Brooklyn, below Avenue H, and you will find a Brooklyn where Syrian Jews dine on kibbeh in Gravesend, and where Muslims heed the call to prayer in Bensonhurst. This is a Brooklyn where the manicured lawns and Mercedeses on Ocean Parkway or in Dyker Heights shout one kind of American dream, and where the Cyrillic lettering on the Russian supper clubs in Little Odessa speak another.

Here is the Brooklyn where the real life drama of Vito Fossella – whose career as the city’s only Republican congressman was undone when he admitted to having not one family but two – exceeds even that of Bensonhurst’s own fictional anti-hero, Tony Manero, whom John Travolta famously captured devouring two slices of pizza from Lenny’s as he strutted down 86th street in “Saturday Night Fever.” In this Brooklyn you can shop at the Avi Glatt Kosher Market in the morning, down blinis for lunch and sample sushi for dinner – all without ever leaving the corner of Avenue U and 8th Street.

END_OF_DOCUMENT_TOKEN_TO_BE_REPLACED

A mere day after John McCain named his vice-presidential choice, I hatched a clever plan to dress as Sarah Palin for Halloween. Soon after, though, the whole country stole my idea − I even know of one sister-brother pair, still in middle school, planning to trick-or-treat as Palin and a moose. (Speaking of moose, remember this great Woody Allen stand-up bit?) 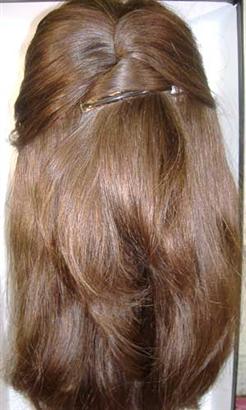 So, okay, I need some other scary get-up for Halloween and will consider all reasonable proposals offered here. For the record, I ruled out going as the McCain Supreme Court—didn’t want to freak out the kiddies.

In the meantime, even women who wouldn’t dream of observing pagan rituals may be “doing themselves up” like Alaska’s governor, albeit without guns or miniskirts: Sarah Palin wigs are now on offer to the Orthodox community, Haaretz reports, just $695 from sheitel.com. If you read the article carefully, you’ll note that this is already the second markdown.

As for me, I’m holding out hope for a post-election-day fire sale.

Trying to push American Jewish seniors to vote Democrat, the Jewish Council for Education & Research has enlisted Sarah Silverman as the face of its new hilarious canvassing campaign, “The Great Schlep.”

Besides Silverman’s outrageous tactics (that often flirt with the inappropriate) are talking points such as, “Obama Loves Israel And So Do You” and “He’s Black, Let’s Talk About It,” as well as Silverman’s own assertion that if anyone should be able to relate to outsiders with funny names it should be the Jews.

This comes in the wake of an AJC poll that concluded Jewish voters favor Obama to Republican nominee John McCain 57 to 30 percent. According to AOL News, Obama is sweeping the 18-29 demographic as well, with a 60 percent share. END_OF_DOCUMENT_TOKEN_TO_BE_REPLACED

Rabbis For McCain, Sort Of

Posted on September 12, 2008 by bdschumanstoler | 2 comments

Yesterday we wrote about Rabbis for Obama. Today, according to a Forward article, we should focus on Rabbis for McCain. Well, sort of. Says the Forward:

[Director of government affairs at Agudath Israel of America and Haredi lobbyist Rabbi Yehiel] Kalish said that the campaign, the first of its kind, is a nonpartisan effort to maximize the voting rate among American Israelis in order to strengthen the Jewish community’s bargaining power in Washington. The hope, he said, is that a high turnout will encourage the winning candidate — and other decision makers — to pay attention to the Jewish community’s priorities when formulating policy. END_OF_DOCUMENT_TOKEN_TO_BE_REPLACED

Over 300 American rabbis publicly announced their support for Barack Obama yesterday with the launch of a “Rabbis for Obama” website.

The movement was founded by Rabbis Sam Gordon and Steve Bob of Illinois in response to what they call the “smear campaign against Obama” that “has been waged in the Jewish community.”

“The smears and lies are specifically targeted to the fears and prejudices of Jews,” Gordon said in a phone interview this morning. “The kind of attacks and criticisms of him are totally unwarranted and caused me and others to respond in a way unprecedented in the history of Jewish rabbis.”

While Gordon and Bob both belong to the Union for Reform Judaism, they say rabbinical support for Obama—and for their movement—comes from across the spectrum. END_OF_DOCUMENT_TOKEN_TO_BE_REPLACED 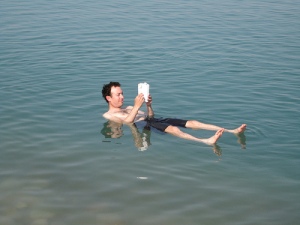 What did you do this weekend? Me? I just sipped some superb Merlot from nearby what Rudy Giuliani, the former mayor of that backward village called New York City, would describe as “cosmopolitan” San Francisco and watched some videos of Republican veep pick Sarah Palin.

Speaking at the Wasilla Assembly of God, her former church, last year, Governor Palin asked Jesus for a $30 billion natural gas pipeline in Alaska and called the war in Iraq “a task from God.” As she put it, “Our national leaders are sending them out on a task that is from God. That’s what we have to make sure that we’re praying for, that there is a plan and that plan is God’s plan.” END_OF_DOCUMENT_TOKEN_TO_BE_REPLACED

Some of My Best Friends are…Lutheran? 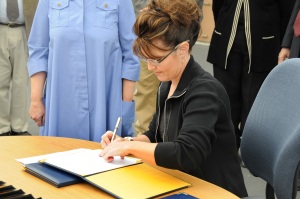 When Sarah Palin ran for mayor in 1996, she apparently floated the possibility that her political opponent was an M.O.T. (“member of the tribe”)—and the tribe in question wasn’t Inuit.

Kudos to the New York Times for conducting on-the-tundra reporting that might have behooved the McCain campaign during the full day or two it allowed for vetting the potential Next-in-Line. The resulting examination of Palin’s meteoric rise in the GOP describes how McCain’s “soul mate” roiled the previously non-partisan arena of Wasilla town politics by introducing wedge issues having little to do with sewers, schools or municipal bonds—issues like guns, abortion and religion. And she got personal about it, too, according to her opponent, three-time incumbent Jeff Stein. Stein told the Times:

“I’m not a churchgoing guy, and that was another issue: ‘We will have our first Christian mayor.’”

“I thought: ‘Holy cow, what’s happening here? Does that mean she thinks I’m Jewish or Islamic?’” recalled Mr. Stein, who was raised Lutheran, and later went to work as the administrator for the city of Sitka in southeast Alaska.

Shoot, next thing you know, she might try to convince people that Obama is a Muslim. (But nobody would believe that!)

Should ADL membership extend to Lutherans, now, too?