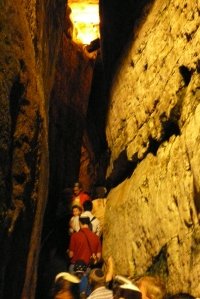 Tunnels. The very word connotes ancient secrets, mystic rites and modern adventure. Israel is blessed with tunnels both natural (the country gets whole pages on spelunking websites) and man made: The “Rabbinical” tunnels alongside and beneath the Temple Mount get lots of attention. Their excavation launched Arab riots as well as a new locus for tourism. (Jerusalem’s coolest tunnel is Hezekiah’s ancient passage to the Gihon Spring, seen at right.)

For Israel’s security forces, it’s the tunnels under Gaza’s border with Egypt that, understandably, generate the most interest. Egypt’s government claims, unconvincingly, that it’s trying to keep the tunnels closed, while evidence at the other end (filmed by France24’s English newscast) shows Gazans’ using the tunnels routinely to smuggle in market goods and even electricity generation. Hamas undoubtedly also uses them for less homey shipments, like weaponry.

Israel’s been unable to police the tunnels since its pullout from Gaza, so the Shin Bet security agency gets its intelligence from Palestinian informants in Rafah, the border town. Unfortunately, according to an article in Haaretz, Shin Bet is willing to abuse its role at Gaza’s border with Israel to coerce possibly innocent Gazans into enlisting as spies.