In for a penny, in for a pound

There is a saying that the Jews who are wealthy got that way not by watching dollars, but instead by taking care of the pennies and the dollars taking care of themselves. By not using earmarks to fund projects for South Carolina and instead using actual bills, DeMint is watching our nation’s pennies and trying to preserve our country’s wealth and our economy’s viability to give all an opportunity to succeed.

The two officials later apologized for their remarks. [HuffPo, AP]

This is why I love academics: They take the ordinary, banal, and regular and infuse it with such overwhelming importance you are likely to think the blister cream used in the 1940s was just as important as D-Day (and who am I too argue it’s not?). But this new book, co-written by a Jewish studies professor at the University of Massachusetts-Amherst, ratchets it up a notch. Ladies and Gents: Public Toilets and Gender examines “the cultural meanings, histories, and ideologies of public toilets as gendered spaces,” and is being touted as “the first multi-disciplinary book about potty politics.”

Of Jewish interest is a foreword by prominent feminist theology scholar Judith Plaskow, as well as an entire chapter called “The Jew on the Loo: The Toilet in Jewish Popular Culture, Memory, and Imagination.” I am trying to imagine what’s in there—this definitely was not a course offered in Jewish Day School. [Temple University Press, Women’s International Perspective]

Religious Accommodation in the Workplace

For religiously observant employees, the decision to “rock the boat” in the workplace is a tricky one. If you keep Hallal should you go the steakhouse with your co-workers or explain why you can’t? If you are Sabbath observant, how early do you leave on a Friday to get home before sundown, and is it worth your co-workers thinking you are slacking off?

While these may seem like small issues, as members of different religions practice more openly, employers are being asked—and sometimes forced—to accommodate their religious employees. In an article published in The National Law Journal, Sheeva Ghassemiow examines different cases where employers have been confronted with the practice of Islam and the challenges it presents in the workplace. END_OF_DOCUMENT_TOKEN_TO_BE_REPLACED 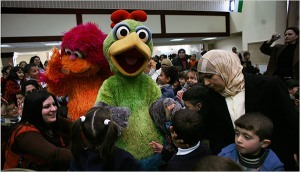 While the upcoming production of “Shalom Sesame” has been receiving a lot attention, this week the New York Times Magazine focuses on “Shara’a Simsim,” the Palestinian version of “Sesame Street.” [NYT]

Florida Democratic Congressman Alan Grayson, a Jew, is drawing critisicm for his use of the word “holocaust” when discussing health care reform. This follows Grayson’s earlier declaration—”The Republican health care plan is this: Don’t get sick, and if you do get sick, die quickly.” Memo to Joe Wilson: It’s on. [The Nation, Politico]

Who needs Hebrew School when you have the Transportation Security Administration? The TSA breaks down one of the wackiest Jewish holidays for its employees:

Observant Jewish travelers may carry four plants—a palm branch, myrtle twigs, willow twigs, and a citron—in airports and through security checkpoints. These plants are religious articles and may be carried either separately or as a bundle. Jewish travelers may be observed in prayer, shaking the bundle of plants in six directions.

And they didn’t even need to use the term palm frond. [TSA]

A majority of American Jews approve of both Obama’s and Netanyahu’s handling of US-Israel relations but do not agree with Obama’s call for a settlement freeze, according to a recent poll.

The American Jewish Committee’s 2009 Annual Survey of Jewish Opinion found that 70 percent of those surveyed called U.S.-Israel relations “somewhat positive,” while 11 percent called them “very positive.” However 51 percent disagreed with the Obama Administration’s call for a stop to all new Israeli settlement construction while 41 percent agreed. (This may be a sign of a shift in American Jewish opinion as Obama received 78 percent of the Jewish vote last November.)

14. Would you support or oppose the United States taking military action against Iran to prevent it from developing nuclear weapons?