Hollywood, Oscars and the Jews 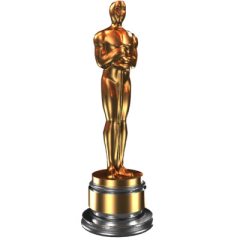 This morning’s Oscar nominations did no favors to anyone hoping to dispel the myth that Jews control Hollywood. In the nine most prominent categories, all but one (supporting actor) included at least one Jewish Hollywood player; Jews represented nearly a quarter of the nominees in those categories.

The idea that Jews run Hollywood is as popular as the notion that they control finance or the media.  After CNN’s Rick Sanchez made comments in October implying that Jews control the media, Slate‘s Brian Palmer decided to look into Sanchez’ claims and discovered that while none of the major news stations are Jewish-owned, Hollywood is, in fact, heavily Jewish—forty-five percent of The Guardian’s “Top Twenty Directors of All Time” are Jewish.

Of course, having a heavy presence in an industry is a far cry from the implications of “controlling” it; the latter implies some sort of cabal, monolithic whole, or conspiratorial agenda, while the former is merely a sociological phenomenon.

Below, find a list of this year’s Jewish Oscar nominees in the top categories.

13 responses to “Hollywood, Oscars and the Jews”