Show Us Your Jewfro!

Do you have a Jewfro?  Think it can compete with the frizziest?  Enter Moment‘s “Frizziest of the Fro” contest for a chance to win an exclusive Moment Jewfro Care Package, your Jewfro on a Moment Cover and the satisfaction of knowing that you can out-Fro them all.  To enter, just post your photo on our Facebook page!

The Death of Yiddish?

For 25 years, the American klezmer band The Klezmatics has been unable to sustain itself solely from their Yiddish klezmer music. The reason is not for lack of talent: In 2006, they won a Grammy award for Best Contemporary World Music Album for their album Wonder Wheel: Lyrics by Woody Guthrie. In an age when music gains fame through social media and viral marketing, a Grammy award may not mean instant fame and success for anyone.  Yet the Klezmatics, the subject of a  documentary called On Holy Ground, have faced difficulties with deeper roots: the decline of Yiddish.

For centuries, Yiddish was more than just an “Oy gevalt” and a “What chutzpah!” thrown into other languages for comic effect. Rather, Yiddish was the beacon of a rich East European Jewish culture of language, literature, poetry, and music, like klezmer. For most of its history, Yiddish was the primary language spoken by Ashkenazi Jews. A variety of factors led to the decline of Yiddish language and culture, most significant of which was the Holocaust; the majority of its Jewish victims were Yiddish speakers. For many of the remaining speakers in Europe, Israel, and the United States, Yiddish stood as a nostalgic emblem of the past and sometimes even an impediment to assimilation and modernization. Only the Hasidic communities of the diaspora have sustained Yiddish as their spoken language. Nevertheless, as the number of Yiddish speakers has dwindled with the passing of the older generations, Yiddish’s rich secular culture has died with them.

A 2006 Modern Language Association survey found that there are just under 1,000 college students studying Yiddish at the 28 institutions offering language courses in the United States. At the beginning of 2010, for example, the University of Maryland, home to one of the nation’s oldest and strongest Yiddish programs, announced that, due to tighter budgets and low enrollment, it would cut funding to the program after this academic year. At the same time, other nails have been driven into “the coffin of Yiddish.” At the end of the summer, The New York Times reported that the only secular Yiddish bookstore in New York was closing. Archives remain full of Yiddish texts, but as Maryland professor Miriam Isaacs laments, today, few people can read or translate them. The body of Yiddish writers, once boasting numbers in the hundreds, now hovers around fifty.

Yiddish appears to be cornered in a Catch-22. Historical circumstances depleted the group of speakers, writers, and thinkers, as did American assimilation. More recently, low demand has resulted in the cutting of Yiddish programs, but such cuts also remove these programs from the “menu” of options available to students. Still, not all is lost for Yiddish language and culture. Organizations, like the YIVO Institute for Jewish Research in New York and the Yiddish Book Center in Western Massachusetts, maintain meticulous archives and proof of Yiddish life and support scholars in the field, in spite of dwindling resources. Though not MTV stars, bands like The Klezmatics continue to create modernized Yiddish klezmer tunes, sacrificing higher-paying jobs for this passion. There remain small pockets of Yiddish revivalism throughout the country, like a Washington DC group of about ten people who meet weekly to speak Yiddish and a Yiddish conversation and music group in Brooklyn. Earlier this month the Jewish Studies Department at San Francisco State University made Jewish headlines by announcing a new “Yiddish History, Literature and Society,” which, though taught in English, will explore Yiddish culture. Nobel laureate Isaac Bashevis Singer summed it up best: “Yiddish has been dying for a thousand years, and I’m sure it will go on dying for another thousand.”

I recently heard a lecture by J. J. Goldberg, senior columnist for The Forward, about the current state of American Judaism and its relationship to Israel. Goldberg spoke about intermarriage and what he termed the “Seinfeld effect,” in which the national popularity of Jewish figures such as Jerry Seinfeld (or, these days, Jon Stewart) leads children of interfaith (or secular Jewish) parents to embrace the Jewish side of their identity. He also argued, like Peter Beinart in a much-discussed article earlier this year, that the right-wing position of major American Jewish organizations toward Israel has the opposite impact on these mostly liberal young people, turning them off of Judaism completely—we could call this the “AIPAC effect.” AIPAC, popularly referred to as the “Israel lobby,” has drawn criticism from liberals, Jewish and non-Jewish alike, for its policy of supporting the decisions of the Israeli government no matter what and condemning anyone who publicly criticizes those decisions.

According to Goldberg, about half of all American Jews marry non-Jews; if you work out the math, that means that for every three marriages that involve a Jewish person, only one is between two Jews. Therefore, about two-thirds of American children who have at least one Jewish parent grow up with some other tradition in addition to Judaism, whether that means another religion, a different ethnic background, or simply a strong secularism. Even many children with two Jewish parents inherit some disconnectedness from Jewish culture and tradition. These children will not be “Jewish by default,” but will need to actively choose to explore their Jewish identity as they get older if they are to keep it at all.

For this reason, says Goldberg, the way Jews and Judaism are perceived in the United States will largely determine the fate of the American Jewish community. Create a positive image, attract many of these independent-minded youth, and the community will grow and flourish. Create a negative one, and the community will diminish until only the much smaller group of religiously committed Jews remains. The Jewish community’s concern, then, should be to ensure that liberal, uncommitted young people see Judaism as appealing and in line with their own values. While Jews continue to be well-liked by Americans as a whole, some worry that the association of Judaism with AIPAC’s right-wing stance on Israel is gradually eroding the ability of the Jewish community to connect to this generation.

Goldberg is partially right. As much as the American Jewish establishment might not appreciate the realization that it does not speak to or for the majority of American Jews, in the long run this truth could be beneficial. It will force Jewish organizations to pay attention to the ways in which people do and do not feel connected to Judaism, and to find new ways of reaching out to those who are more distant. Perhaps it will also lead to the creation of a new relationship with Israel, one that strongly supports the Jewish state without alienating the liberal majority of American Jews.

However, merely making Judaism more attractive and relatable is not enough. Jewish religion and culture are overflowing with substance, from spirituality to social and environmental justice to history, literature, and music. Synagogues and other Jewish organizations must tap into this vast reservoir of tradition and teach that Judaism is more than just a glitzy bar-mitzvah party or an Israel fair serving microwaved falafel on paper plates. Seinfeld and AIPAC may represent opposing front lines in the struggle for young Jews’ hearts, but they are only the beginning; they cannot be the whole struggle. In short, if American Jewish leaders are going to bring more people to the doorway of Judaism, as they should, they must also ensure that there is something worthwhile on the other side.

Do You Want to Friend Heino? 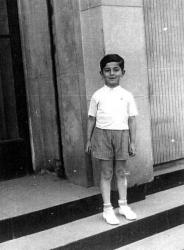 “My name is Henio Zytomirski. I am seven-years-old. I live on 3 Szewska Street in Lublin.”  So begins the profile of Heino Zytomirski, a young addition to Facebook. Why should we care? Because Heino is dead–a young victim of the Holocaust.  His profile and status updates are written by Piotr Buzek, a 22 year-old staff member of the Brama Grodzka Cultural Center in Lublin, Poland. The Center says that it is harnessing new technology to teach the internet generation about the history of Jews in Poland and to keep their memory alive.

To be perfectly honest, I feel queasy about this approach. First of all, much of what the Center does focuses on Lublin’s Jewish past. Which is important and necessary. But in doing so, it also looks backwards and not ahead. There is increasing evidence that Jewish communities in Poland not only exist, but are growing. Just look at the articles recently published by JTA. So why isn’t the Center celebrating and advertising those triumphs? It could easily choose a young 20-something living Polish Jew to talk about his life, his experiences, and his hopes to friends around the world. END_OF_DOCUMENT_TOKEN_TO_BE_REPLACED